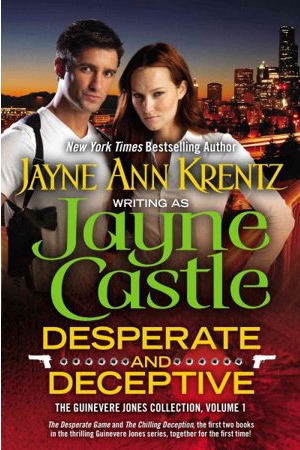 The Desperate Game and The Chilling Deception, together for the first time!

Meet Guinevere Jones—a woman with a talent for love and trouble—and Zac Justis—her sexy and dangerous partner in crime—in the first two books in the New York Times bestselling series.

The Desperate Game (originally published June 1986 by Dell Books, writing as Jayne Castle and July 2012 in eBook format by InterMix)

It’s hard to keep a small business afloat—just ask Guinevere Jones, owner of a struggling temp agency. And security consultant Zac Justis isn’t making her life any easier. After he blackmails Gwen into helping him solve a computer crime, she finds herself caught in a web of suspense, danger, and love.

The Chilling Deception (originally published August 1986 by Dell Books, writing as Jayne Castle and July 2012 in eBook format by InterMix)

A temp job as an executive secretary gives Guinevere Jones access to high places—and sets her instincts for danger tingling. Convincing Zac Justis to provide security for her client during a meeting on the wintry San Juan Islands gives her peace of mind, but brings them face-to-face with a dead man determined to avenge the past.

Other Books in Guinevere Jones Series