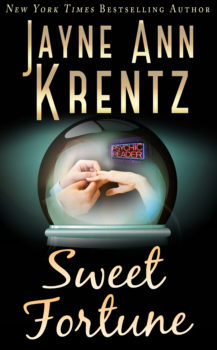 Sam Hatchard has his eye on building a business empire and Benedict Fasteners is going to be the cornerstone. But after talking his way into the CEO job, he realizes there is one small problem with his plan—old man Benedict wants to keep the business in the family and Hatch isn’t family. But problems like this don’t have to stand in the way of a good plan. With Benedict’s blessing, Hatch is going to marry his way into the family.

Jessie Benedict knew the engagement was a bad idea. Hatch is brilliant when it comes to business but he doesn’t want her, he wants her inheritance. She just needs a way to break the engagement without breaking her father’s heart. Plus, after years of job-hopping, she has finally discovered her calling—at a psychic detective agency! When a case forces her to work with Hatch, Jessie soon discovers that his passion extends beyond the boardroom. Things are about to get complicated.