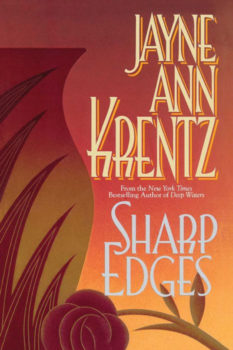 Eugenia Swift is a young woman of singular sensibilities, and a connoisseur of beauty. As the director of the Leafbrook Glass Museum, she’s been asked to travel to Frog Cove Island — an artistic haven near Seattle — to catalog an important collection of art glass. But thanks to unsavory rumors surrounding the collector’s death, the museum insists that Eugenia take along Cyrus Chandler Colfax — a rough-hewn private investigator whose taste in glass runs to ice-cold bottles filled with beers.

When Colfax declares they must pose as a couple, Eugenia protests in a manner as loud as his Hawaiian shirts. She fears that her secret mission will be discovered…while he hopes that she will be a mask for his own hidden agenda. But soon their very lives depend on making an utterely convincing couple. Because among the chic galleries of Frog Cove Island lurks a killer, and their only chance for survival is the boldest, most artful collaboration they can dare to imagine.