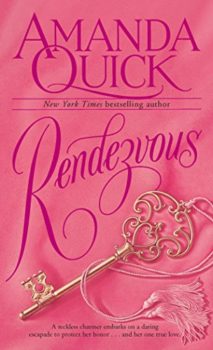 From the elegantly appointed drawing rooms of London’s most exclusive club to an imposing country estate in the heart of Dorset comes a provocative tale of a free-thinking beauty, a dignified lord, and a mad, impetuous love that defied all logic…

Augusta Ballinger was quite sure that it was all a dreadful mistake. The chillingly pompous and dangerously disturbing Earl of Graystone could not possibly wish to marry her. Why, it was rumored that his chosen bride must be a veritable model of virtue. And everyone knew that Augusta, as the last of the wild reckless Northumberland Ballingers, was a woman who could not be bothered by society’s rules.

That was why the spirited beauty had planned a midnight encounter to warn the earl off, to convince him that she would make him a very poor wife indeed. But when she crawled in through his darkened study window, Augusta only succeeded in strengthening Harry’s resolve: to kiss the laughter from those honeyed lips and teach his maddening miss to behave! How could he possibly know that it he who was in for a lesson…as his brazen fiancee set out to win his heart—and an old and clever enemy stepped in to threaten their love, their honor, and their very lives?