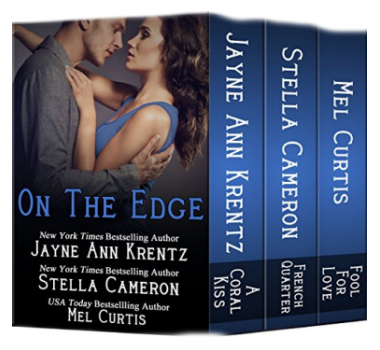 Bestselling authors Jayne Ann Krentz, Stella Cameron, and Mel Curtis bring together three romance novels in one boxed set. From a sultry island, the steamy bayou, and the heat of Hollywood — you’ll be taken on romantic journeys you won’t soon forget.

As far as Amy Slater was concerned, she and the mysterious Jed Glaze had the perfect relationship…they were good friends. Amy needed someone who wasn’t demanding and Jed needed someone who wouldn’t ask questions when he disappeared for weeks at a time. It worked, until…

Amy and Jed jet off to an island paradise to uncover the source of Amy’s crippling nightmares. Together they will reveal the island’s secrets and their true feelings for each other.

The shocking death of her employer and patron Errol Petrie, the excesses suggested by the murder scene, and the investigation that is sure to follow are just some of the pieces of Celina Payne’s nightmare. And the last man she trusts is now the only man she needs.

Errol’s business partner and friend Jack Charbonnet, is powerful, enigmatic, and not about to let Celina hide from the truth. Somebody in New Orleans’ French Quarter killed Errol and Celina Payne tops the list of suspects. Jack’s past is as mysterious as the sultry bayou. He is said to be too dangerous to know, and deadly if crossed. Jack holds the key to Celina’s deliverance or her destruction…

Blue Rule has enjoyed his Hollywood bachelor lifestyle. Until now. Some of his ex-girlfriends have banded together for revenge. Is getting real with a reality show and producer Maddy Polk his redemption? Or will it send his exes over the edge?