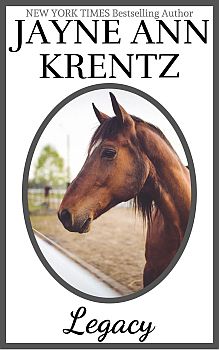 Constantine Landry has one foot in the business world and one at the track. Legacy is the foal of his stepfather’s champion stallion and Conn’s only remaining link to the man who raised him.

Honor Mayfield has a sister in trouble and she’ll do anything to make that trouble disappear—even if it means risking her own life in the process. Conn steps in to keep Honor out of trouble, but Honor soon discovers their pasts are linked. Honor realizes too late she’s been deceived and must fight her desire for Conn.

Originally published in Harlequin Intrigue #10 in 1985.