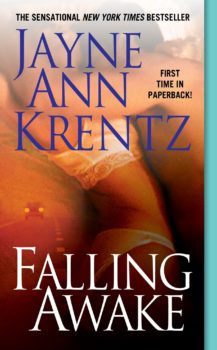 A red scarf. A roller coaster. A tidal wave of blood…

Isabel Wright spends her days at the Belvedere Center for Sleep Research analyzing the dreams of others. Dr. Martin Belvedere, a pioneer in the field, recognized her unique talent for what he calls Level Five lucid dreaming. It’s satisfying, lucrative work, but it can be emotionally draining. Especially when one of her anonymous subjects, known only as Client Number Two, captures her imagination through his compelling dream narratives. Secretly, she thinks of him as “Dream Man.”

His real name is Ellis Cutler. A loner who’s learned not to let anyone get too close, he works for a highly classified government agency with an interest in the potential value of lucid dreaming. And he’s just been ordered by his boss to make contact with Isabel, who’s been fired after the sudden death of Dr. Belvedere. Heading to California, he pushes his fantasies out of his mind, determined to maintain a professional relationship with the woman who reads his dreams, the mysterious figure he has come to think of as “Tango Dancer.”

But when they meet in the flesh, the dream becomes real enough to touch. And a waking nightmare begins—when a suspicious hit-and-run leads them into a perilous web of passion, betrayal, and murder, and forces them to walk the razor-thin line between dreams and reality.