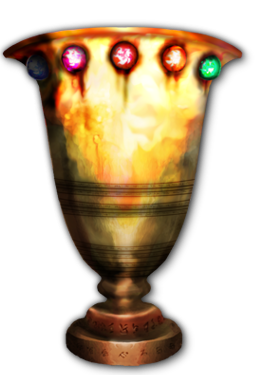 Energy surged in the room. Hot ultralight flashed and crashed in the small space. She knew that Jack was fully, completely fired up, in the zone. The scope of his talent was breathtaking.

Lamp of undetermined gold-colored metal
Great Britain, ca 17th century, AD
Vessel inscribed heavily with alchemical symbols on the base and body and inlaid with stones around the rim.
Fired Up, Arcane Society Book 7.

This eighteen-inch vessel is made of an undetermined gold-colored metal. The heavy base and tapering body of the vessel are inscribed with many alchemical symbols with various large colored crystals inlaid around the flared circular rim. When the lamp is unlit the crystals appear a murky gray. The lamp was forged by Nicholas Winters, a rival and later a mortal enemy of Sylvester Jones. It is believed that only certain men of the Winters bloodline possess the talent required to activate the lamp. The full extent of the lamp’s power is unknown, and the final crystal remains unlit to this day. Researchers are convinced that anyone who succeeded in accessing the energy trapped in the lamp would be driven insane by the resulting psychical overload.